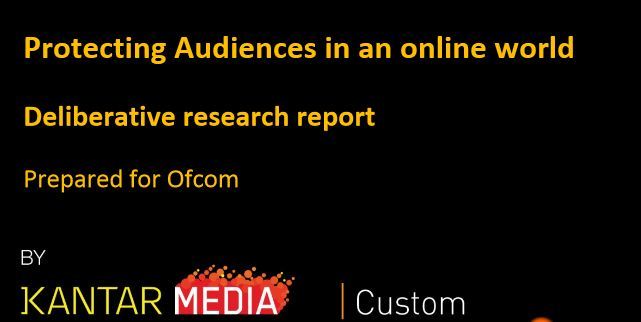 On 4 December 2014, Ofcom published the outcome of recent research conducted by Kardar Media, which deals with audience views of protections for audiovisual content delivered across different platforms and connected devices.

Ofcom commissioned Kantar Media to conduct a series of research workshops with 132 members of the public to understand what people think of current protections for audiovisual content delivered on different platforms and on a range of internet connected devices, and what protections they consider they should have both now and in the future.

The key findings are as follows:

This report is the latest of a long series of Ofcom's produced or commissioned reports to document new trends in viewing and consumption patterns, the awareness and use of protection tools and the attitudes and expectations concerning regulation. The present report comes two years after the Ofcom's commissioned Ipsos Mori research on "Protecting Audiences in a converged world" which was also dealing with audience views of protections for audiovisual content delivered across different platforms and connected devices.

In addition, the British Government asked Ofcom to produce three reports on internet filters and online safety. The first, published in January 2014 "Ofcom Report on Internet safety measures - Strategies of parental protection for children online" looked at parental strategies for protection of children online reviewing Ofcom’s Media Literacy research from 2012 and 2013. The second report "Ofcom Report on Internet safety measures Internet Service Providers: Network level filtering measures" (July 2014) set out the measures put in place by the UK’s four largest ISPs (BT, Sky, TalkTalk and Virgin Media) to introduce a family-friendly network level filtering service, which allows the account holder to choose to block web based content that might be inappropriate for children at a network level. The final report is announced for early in 2015 and will review Ofcom’s Media Literacy research from 2014 on parental strategies for protection of children online.