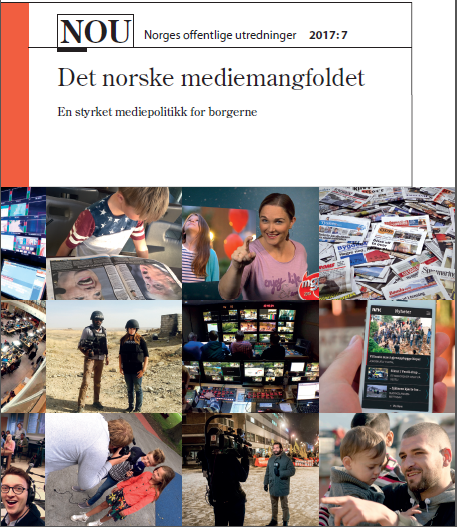 The Commission proposed various changes to current media policy instruments, and put forward various new measures. Most of the measures apply for an initial four-year period, and the Commission has emphasised the need to evaluate the measures before deciding if they should be continued.

Independent, editorial news media are experiencing extensive changes due to technological developments, global competition and changes in media usage. Established business models are failing to provide sufficient income. The Commission believes there is a significant risk that journalism that is essential for the public discourse, may diminish before sustainable business models are developed. The Commission therefore proposes a number of new initiatives and schemes:

The Media Pluralism Commission submitted an initial report on commercial broadcasting in October 2016 in which it concluded that, if the State still desires a commercial public service broadcaster based outside Oslo, there is a need for new instruments.

The Norwegian Government appointed the Media Pluralism Commission in September 2015, with a mandate to evaluate what the State’s media pluralism objectives should be and to examine the totality of Norwegian media output with particular focus on two areas: the function of news and current affairs media and the media in general in disseminating news and debate, as well as the impact of public service broadcasters on Norwegian language and culture. Based on this analysis, the Commission was asked to make proposals as to the focus of State fiscal policy instruments in order to promote open, informed public debate and diverse media output.