NRK contributes positively to media plurality in Norway according to NMA 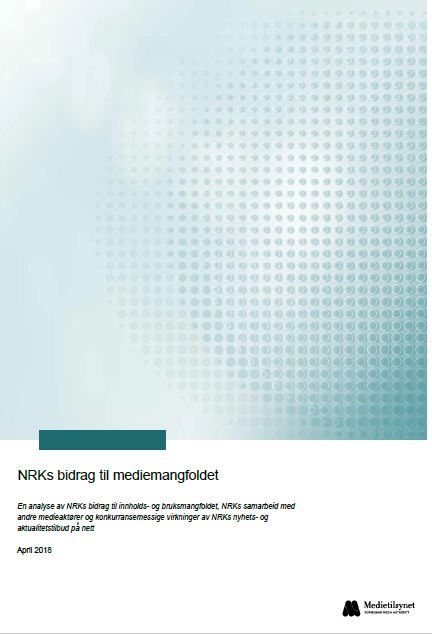 In a report published on 11 April 2018, the Media Authority (Medietilsynet) concludes that the public service media NRK contributes positively to the overall media plurality in Norway, and that NRK's online presence does not seem to cause significant restrictions on competition in the markets that have been analysed.

The Media Authority has analysed NRK's ​​activities, both from a content and consumption perspective and in a competitive context, nationally and regionally with a particular focus on news and current affairs offer online. The Media Authority has, in addition to its own assessments, brought in analyses from independent media researchers and consultants on the competitive analysis.

The main conclusions of the Media Authority's report are as follows:

When presenting the report, NMA's Director Mari Velsand emphasised that commercial media, especially local and regional newspapers, is still in a demanding transformation phase and that it would be urgent to take action aimed at this part of the industry. In this context, she refered to the proposals presented by the Media Pluralism Commission on 7 March 2017. She however emphasised that weakening NRK may have negative effects on the overall Norwegian media diversity and would not be a solution to the challenges faced by commercial media.

The Media Authority had been commissioned by the Ministry of Culture to assess how NRK's offer, compared with the offer of other actors, contributes to plurality in terms of content and consumption, and to what extent NRK contributes to media diversity through cooperation with other players. The audit should also consider whether NRK's content, especially the content offered digitally, affect the offer of commercial players and if the offer to the public is thereby impaired.

Additional EPRA Background: Note that public service and public interest content in the digital age will feature prominently on EPRA's agenda during the 47th EPRA Meeting in Luxembourg on 23-25 May 2018 with a plenary session.