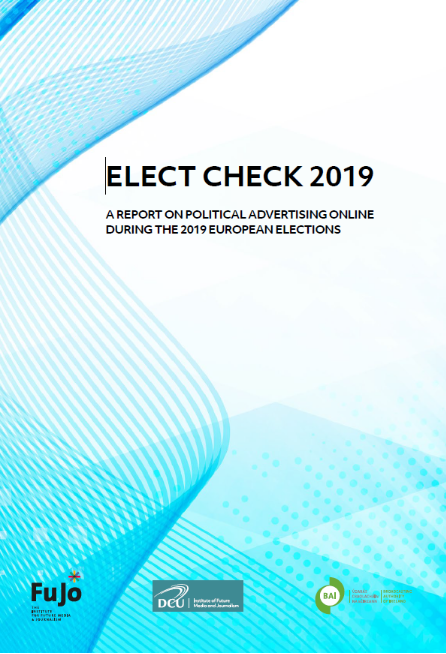 ElectCheck 2019, a new research report, commissioned by the Broadcasting Authority of Ireland (BAI) was published on 17 September 2019.

BAI's research was undertaken as part of a wider EU project, designed to assist the European Commission in monitoring the implementation of the commitments in the Code of Practice on Disinformation signed in October 2018 by Facebook, Google and Twitter, among other stakeholders.

Against this background, the Broadcasting Authority of Ireland (BAI), commissioned the Institute for Future Media and Journalism at Dublin City University to implement monitoring of the political advertising archives provided by Facebook, Google, and Twitter for Ireland. The data consisted of 1,554 political advertisements from four archives – Facebook’s Ad Library (280); Facebook’s Ad Library Report (1,091), Twitter’s Ad Transparency Centre (88); and Google’s Ad Transparency Report (95) – during the period 18 April 2019 to 24 May 2019.
Here are some of the highlights of the Irish report:

Inconsistencies and limitation of data

The study relied on the data released publicly by the platforms, through a report or a library page accessible via an API, a webpage or a CSV format. Inconsistencies between the platforms and the limitation in available data restrict the effectiveness of the monitoring report. However, it also reveals the lack of transparency of the platforms regarding the information publicly disclosed. For instance, the platforms do not provide a clear explanation of their “registration/authorisation” process for political adverts, which would allow to get a better understanding of the labelling procedure. Moreover, the information is disclosed in a way that does not allow real-time monitoring and were not always accurate.

By signing the Code of Practice and releasing publicly data on political adverts published on their platforms, obvious efforts on transparency can be noted. For instance, all adverts are labelled as sponsored and, in most of the cases, the sponsor is identified (even if, for Twitter, the disclosure of payer information is not easily accessible and requires to click on various links). However, Google adverts do not include a disclaimer (a label on the advert that stated that it was political or issued-based).

For a more effective regulation, a clear definition of issue-based adverts and transparent registration process should be established.

For better transparency towards users, data should be provided in a more user-friendly manner to allow users to understand the mechanisms behind the adverts published on his/her page.

The transparency of online political advertising is a significant concern because online platforms have become a key means of accessing news and information. The influence of online platforms in Ireland is detailed in the 2019 Reuters Digital News Report Ireland:  67% of people use digital media as their main source of news and 53% use social media as a main source of news.