Standardised procedures, more transparency and collaboration with researchers: the recommendations of the French CSA and the Irish BAI 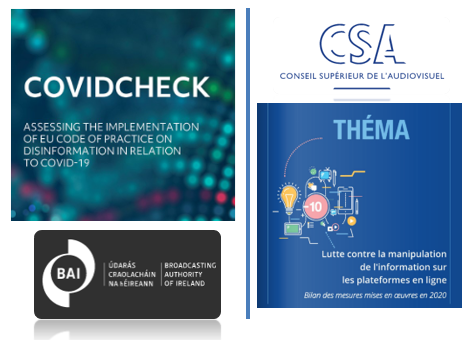 On 21 September, the French Conseil supérieur de l'audiovisuel (CSA) released its second assessment report on the measures taken by platforms to tackle information disorder, as required by the Law on the fight against information disorder (LOI n° 2018-1202 du 22 décembre 2018 relative à la lutte contre la manipulation de l'information). Meanwhile, on 16 September, the Broadcasting Authority of Ireland (BAI) published and presented "CovidCheck", a report analysing the actions of online platforms with regard to Covid-19 disinformation.

Both the CSA and the BAI organised an online event to present the outcomes of their respective reports.

The new report assessment by the CSA

Based on data reported by 11 platforms* for the year 2020, this second report essentially assesses the measures taken to tackle Covid-19 disinformation but also the implementation of the recommendations stated by the CSA in its previous report.

In general, the CSA welcomes the increasing quantity and quality of data provided by the platforms and their willingness to cooperate with the regulator. However, some major and crucial points still require further collaboration and transparency from the stakeholders.

As a result, the CSA issued 16 recommendations that the platforms should take into account in the forthcoming (yearly) monitoring exercise. Among the points raised by the regulator, the following issues are worth highlighting:

More generally, the CSA also recalls the crucial necessity of ensuring compliance with individual rights and especially the right to freedom of expression within content moderation mechanisms. Freedom of expression and manipulation of information will be a key focus of the forthcoming CSA assessment as presidential elections will be held in France in 2022.

The CovidCheck report of the BAI

Commissioned by the BAI to the Institute for Future Media, Democracy and Society (FuJo) at Dublin City University (DCU), this report is part of the Code of Practice on Disinformation's monitoring project implemented by the European Regulators Group for Audio-visual Media Services (ERGA) and the third in this series*.

The document is based on the reports shared by platforms (Facebook, Google, Microsoft, Mozilla, TikTok and Twitter) regarding their Covid-19 actions but also on some further Irish case studies on Facebook, Twitter and AI and Automation. In a nutshell, some key elements of the CovidCheck and recommendations from the BAI are as follows:

--> The Irish regulator recommends the establishment of meaningful KPIs to report results and outcomes regarding key areas such as content and account removals, factchecking, content labels and media literacy campaigns.

--> The BAI calls for more data and transparency regarding the use of automated systems (what mechanisms are implemented, languages covered, the kinds of disinformation they are trained to detect, the risk assessments conducted…). Such data should be shared with the regulators and the researchers.

--> The regulator encourages stakeholders to introduce a framework addressing disinformation in comments in compliance with the European Convention of Human Rights and the right to freedom of expression.

The BAI also calls for the inclusion in the Code of Practice of a commitment to establish an independent auditor and in general deplored the lack of country-specific data and the slow implementation of the previous recommendations.

In any case, as pointed out by Celene Craig, Deputy Chief Executive of the BAI, "more systematic and detailed monitoring will require significantly increased resources".

*The ElectCheck 2019 report on the political advertising on platforms (see EPRA news) and the CodeCheck report in 2020, focused on activities to empower consumers and the research community.