News avoidance, generational gap and the limits of the news business model 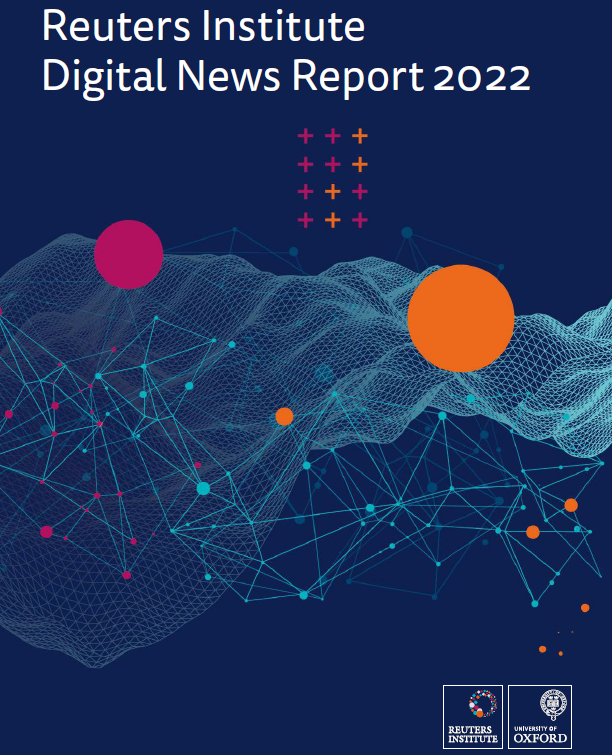 On 15 June, the 2022 Reuters Digital News Report was released, providing a broad and in-depth picture of the last year's news consumption. Based on surveys launched early February in 46 different markets, the report has been enriched with new surveys sent early April in five countries (UK, US, Germany, Poland, and Brazil), to include some insight into the Ukraine war consequences on news consumption.

Two years after the emergence of the pandemic, the effects observed during the Covid-19 crisis - an increased consumption of news and trust in media - have slowed down and the decline of traditional media is not compensated by digital media consumption yet.

The report highlights a significant decreasing interest in news – 63% of the respondents declared being interested in news in 2017 but only 51% in 2022 – and a phenomenon of selective avoidance of news, emphasised by the war in Ukraine.

Several reasons can explain this growing disinterest in news: 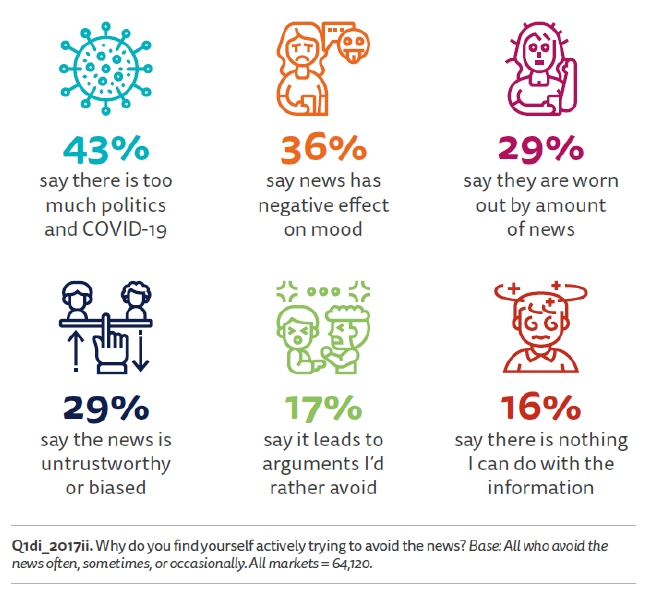 The issue of trust:

The lack of interest in news is closely correlated to a decreasing level of trust in media.

Even though public service broadcasters are still considered as the most reliable media, especially in times of crises such as the Ukraine war, the trust in public service media (PSM) and in media in general is declining (except in Sweden). In Europe, Finland remains the country with the highest level of trust in media (69%), while Slovakia appears to have the lowest level of trust (26%).

It is worth noting that the roots and grounds of mistrust differ from one country to another: For instance, in France, the level of education and income seem to have an impact on the level of trust placed in media while in Central and Eastern Europe, respondents seem to blame a lack of political independence.

More generally, respondents criticise the media for putting their political views or commercial interests ahead of society. 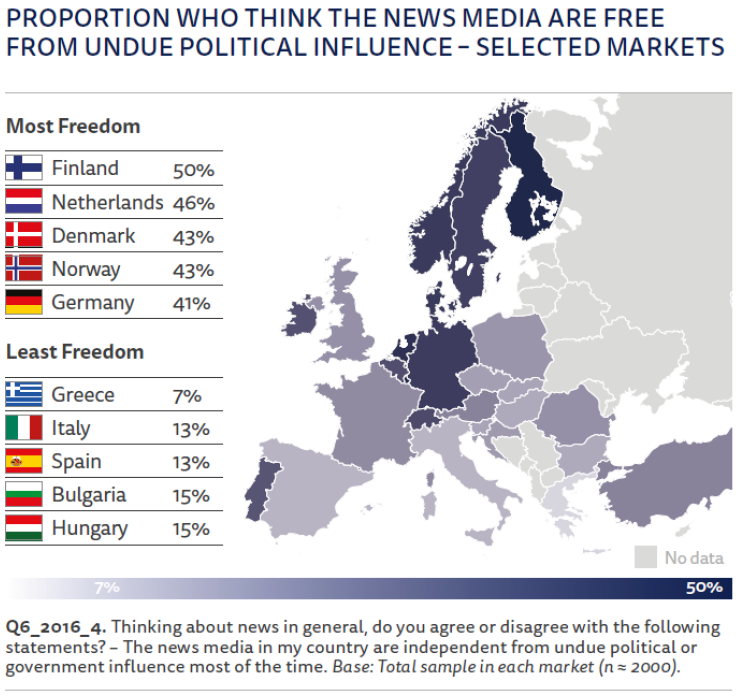 2. Sustainability: The dilemma of the subscription model

The structural shift towards a more digital, mobile and platform-dominated environment has certainly boosted innovation in business models, industry cooperation and news' formats.

However, the now widespread subscription model and online paywall seem to have reached a plateau. Consumers, the new generation in particular, are more likely to pay for video-on-demand, music or sports than for a news provider, and even less for several news providers. The difficulty to have multisubscription users has led to a "winner takes all" dynamic, for the benefit of the major news providers.

Besides a reluctance to give up private data, there is also a clear trend, especially from the 18-24 group, to access news via social media or news aggregators, restricting direct access to the websites.

At the end, such a subscription model is likely to emphasise disconnection with the audience, and even more with the current cost-living crisis and the inflation which might tend to cut household's budget for media.

The report thus suggests that it might be time to rethink the business model in order to secure media sustainability and news consumption.

3. The future of news: A generational gap

- Access to news: The report highlights the domination of smartphones and the continuous increase of social media as a gateway to news.

Focus on TikTok: The fastest growing network has become a significant new player in the news ecosystem, especially since the Ukraine war with citizens sharing videos of their daily life. It is worth noting that the TikTok algorithm does not show content based on who the user is following but on what the user likes and what others are watching.

The 18-24 group is more likely to watch video news - while the other age groups will rather read news, still the most popular format - and is willing to see journalists express their opinions and views on topics. In this regard, the digital format has created opportunities for journalists to create a more direct and individual link to their audience through newsletters, platforms such as Substack or Patreon or social media profiles.

Focus on podcasts: The popularity of this format has led to a battle between big tech companies, investing in podcasts to feed their platforms, and major news publishers producing podcasts to keep control of the monetisation and distribution of their content.

Conclusion: This new 2022 report observes an increased disconnection and highlights the challenges that media will have to face to maintain their audience and remain a reliable source of information in the eyes of the generation to come (single gateway to news, more visual news, partial and easier news to understand, free access...). At a time when major crises occur and polarisation on topical matters such as climate change increase, the report emphasises that the need to rely on trustable news is higher than never.

NB: As usual, the Broadcasting Authority of Ireland, the Commissariaat voor de Media from the Netherlands and Ofcom from the UK are partners of the Reuters digital new report and national reports have been produced.