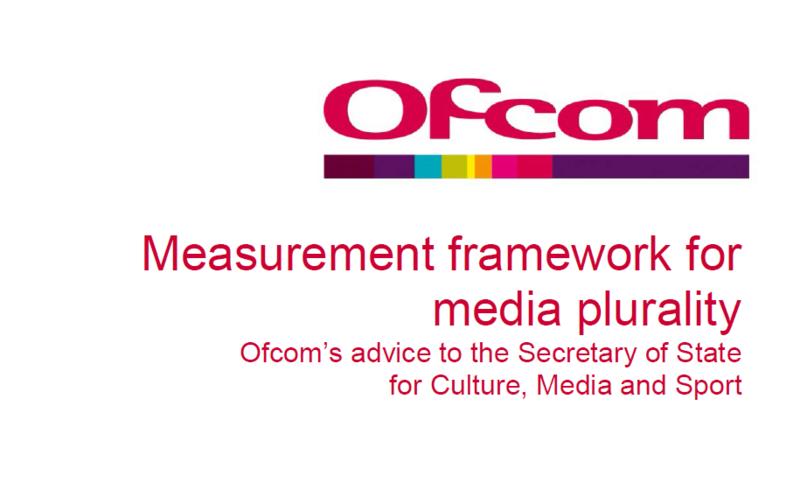 On 5 November 2015, Ofcom published its advice to the Secretary of State for Culture, Media and Sport on the Measurement framework for media plurality it had been asked to develop in 2011 in order to assess media plurality in the UK and in each of the nations. To do so, the regulator has taken into account the views of stakeholders through both an initial call for inputs (launched on 30 October 2014), and a consultation on a draft framework (published on 11 March 2015). The new statement is not an assessment of the extent of media plurality in the UK but provides a framework for how such an assessment might be made.

The key features of the framework are the following:

Furthermore, the Secretary of State had asked that at least one of the measures focused on media ownership. Ofcom considers ownership in the framework by aggregating availability and consumption metrics by owner. The framework makes a distinction between wholesale and retail functions of news providers. The former refer to news providers that produce their own content, the latter refers to brands or outlets that may carry content produced by third parties.

In the consultation, Ofcom had noted the importance of intermediaries (such as search engines or social networks) for the discovery of online content and news sources. However, in many cases, online intermediaries may not be categorised as retail or wholesale news sources if they are neither the provider of a news title or brand nor the producer of a news source. Intermediaries should therefore be considered as a separate category distinct from the retail and wholesale classifications when looking at media consumption metrics. Doing so indicates how news sources are accessed online and the role that intermediaries play, including the extent to which they are used.

The present statement represents the conclusion of Ofcom's work spanned over four years in response to the Secretary of State’s request in relation to the design of a framework for plurality measurement. In the course of the consultation, Ofcom emphasised that media plurality policy and the question of what constitutes ‘sufficient’ media plurality are ultimately for Government and Parliament, while Ofcom’s role is to act as an expert advisor and reporter to the Secretary of State.

Ofcom is still conducting work in related areas. In November, Ofcom published its recommendations to Government concerning the 3-year review of the rules relating to media ownership. In addition, the 2015 edition of the news consumption report across TV, radio, print and online is expected to be published later this year.

Measurement framework for media plurality, Ofcom's advice to the Secretary of State for Culture, Media and Sport (EN)