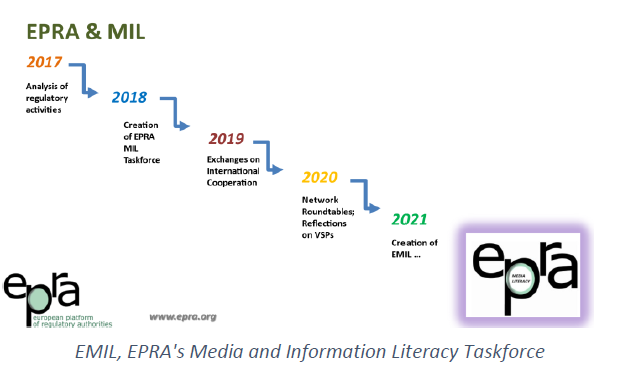 one is talking about media competence. Who takes responsibility?” was the title of a conference organised on 19-21 April 2021 by COMMIT, the Community Media Institute for Continuing Education, Research and Consultancy, an institution at the interface between non-commercial broadcasting, adult education and research in Austria.

The conference offered an opportunity for international exchange and policy learning: renowned experts presented the MIL concept developed by the UNESCO, the concept of Critical Media Literacy as well as experiences and strategies of various national MIL networks. Together, they developed the basis for establishing a MIL network in Austria. EPRA Vice-Chairperson Maria Donde was invited to share EPRA’s experience on media literacy and report on the latest developments of EMIL, the EPRA Media Literacy Taskforce as “a network of MIL networks”.

Key points of her presentation include:

- Summary of conference findings and links to further presentations (DE/EN)