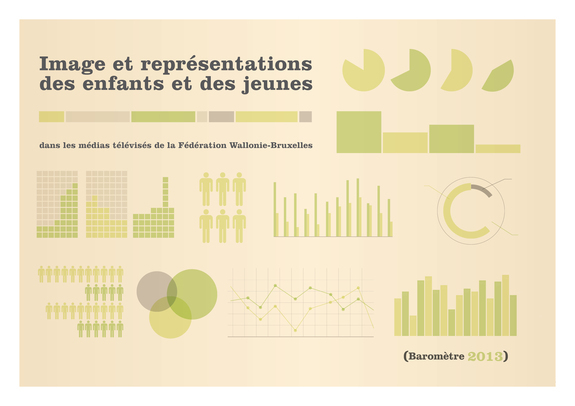 On 24 October 2013, the Regulatory Authority of the French speaking Community of Belgium (CSA) published a study entitled "Baromètre jeunes" (Young People’s Barometer) analysing the image and the representation of children and young people in television broadcast content.

The study presents an image of young people aged 3 to 30 years as they appear in television productions and co-productions within and specific to the Federation Wallonie-Bruxelles. More than 11,000 cases of young people being represented were identified and described over more than 15,000 hours of programmes. Thirty different factors were taken into consideration for the analysis.  The factors referred to the young people’s social and socio-economic identity, their mediating and social roles, the way they present their opinions and the context in which they appear on the TV screen.

The "Baromètre jeunes" is complementary to the results of Baromètre diversité/égalité (Diversity/Equality Barometer), the research assessing the perception of diversity in television programmes broadcast in the Federation Wallonie-Bruxelles published by the Belgian CSA in March 2013. While "Baromètre diversité/égalité" already showed that children and adolescents were poorly represented on television and only rarely have an opportunity to speak, "Baromètre jeunes" seeks to understand HOW young people are presented on the TV screen. This study was complemented by the Guide to Good Practices.

This study was complemented by the Panorama of Good Practices - See more at: http://www.epra.org/news_items/measuring-diversity-on-television-outcome-of-french-and-belgian-assessment-for-2012#sthash.34ygorLL.dpuf


The results of the study show a deficit of youth representation on the TV screen, whether in term of social identity or active participation (speaking, mediating and social roles). If they have their place in  television - essentially in public television, but particularly in local television - this place is limited, focused, even stereotyped, especially with adolescents (13-18 years). The overall image sent out by the media is that of young people not speaking, passive and disinvested in programmes for all kind of public.