Ofcom (UK): Its plan for the future of media plurality 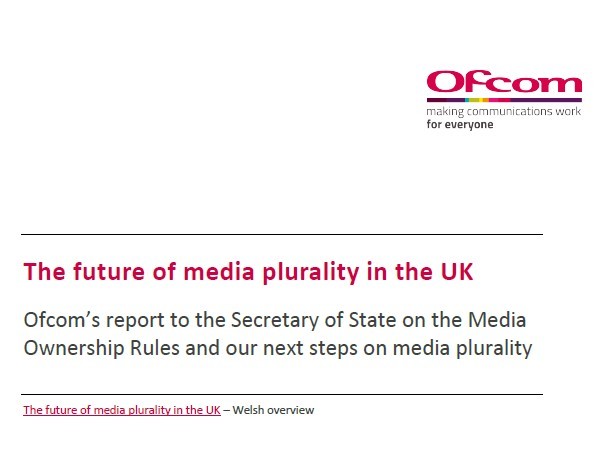 On 17th November 2021, Ofcom published its latest considerations on the subject of media plurality. Alongside its regular review of media ownership rules, Ofcom decided this year to look at the role of online intermediaries, algorithms, and market changes and their impact on plurality in the UK. For that purpose, Ofcom published a Call for Evidence in June 2021 and received 19 responses from a range of stakeholders. In addition, the UK regulator engaged with international academics and experts on media plurality and measurement (notably the MPM team in Florence and the University of Amsterdam) and with international organisations active in the field such as the Council of Europe and the OSCE Representative on Freedom of the Media.

Further to the consultation, Ofcom has set out the next steps in its work to ensure that the regulatory framework remains fit for the modern news landscape.

Next steps on media plurality in the UK

Taking account of responses to the call for evidence, Ofcom identified three features of the modern UK media landscape that might present a risk to media plurality, but which the existing regulatory framework does not cover:

Having identified these risks, Ofcom will now build a more detailed understanding of whether and how these issues present problems for media plurality in the UK, and consider how they might be addressed. Ofcom will set out recommendations by summer 2022.

Ofcom also pledged to coordinate its work on media plurality with other relevant areas of its own work (Making Sense of Media programme, online safety), with competition regulator CMA and other members of the Digital Regulation Cooperation Forum (DRCF).

Following consultation, Ofcom has concluded that the media ownership rules set by the UK Parliament continue, in part, to support its policy goal of ensuring that the media operates in the public interest.

It is recommending that that some of those rules should be retained in their current form (e.g. restrictions on political bodies and local authorities holding licences), but that others should be modified to better reflect the way people access and consume news today. This includes a recommendation to broaden the scope of the Media Public Interest Test framework to cover concerns in mergers involving a broader range of “news creators”, beyond print newspapers and broadcasters.

The statement also includes a summary of the responses to the consultation as well as an overview of the key changes to the market for news in the UK over the years, and the challenges arising as a result – both within the UK and the wider international context