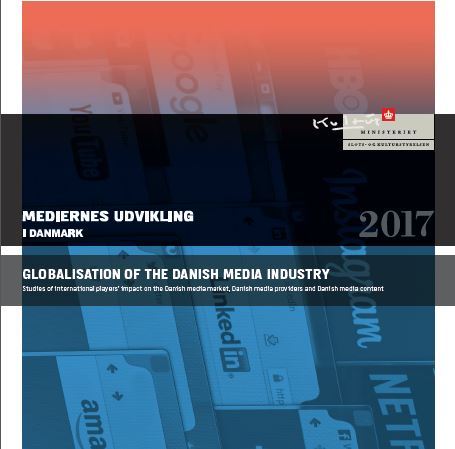 On 13 September 2017, the Danish Agency for Culture and Palaces (Slots- og Kulturstyrelsen) has published an extensive study on the impact played by international players (such as Google and Facebook) on the media market, media providers and media content in Denmark. This report describes how, in recent decades, the Danish media market has become increasingly and fun­damentally impacted and dependent on the actions of foreign technology companies.

The main conclusion of the report is that in 2017 Danish media companies are manifestly no longer capable of determining the technological, distributive or commercial standards they use when they pro­vide Danish content to Danish media consumers. The standards are now determined  – and continually changed – by global players.

This report is subdivided into four sections. Each describes from its own perspective how foreign players are affecting the Danish media industry:

Finally, the report lists eight essential issues that politicians and media stakeholders should consider in connection with impending negotiations regarding Danish media subsidies.