Changing patterns in the consumption of news in Ireland

Changing patterns in the consumption of news in Ireland 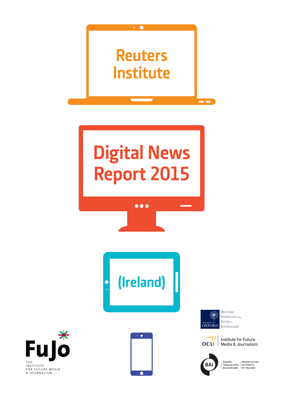 New research commissioned by the Broadcasting Authority of Ireland (BAI), which was published on 23 June, highlighted significant changes in the way in which Irish people access news. This new report is based on data generated for the 4th Reuters Institute Digital News Report published on 16 June. The BAI facilitated the inclusion of Ireland, for the first time, in this international research project as part of its work on media plurality in Ireland. The BAI partnered with the Institute of Future Media and Journalism (FuJo) at Dublin City University (DCU) to produce a more detailed Irish specific digital news report. The research was conducted via an online questionnaire. The sample size was 1,501 adults accessing news online once a month or more.

Among the key findings of the analysis were:

2015 is the fourth year of the Digital News Report from the Reuters Institute for the Study of Journalism at the University of Oxford. This year's report reveals new insights about digital news consumption based on a survey of over 20,000 online news consumers in the US, UK, Ireland, Germany, France, Italy, Spain, Denmark, Finland, Brazil, Japan and Australia. This year's data shows a quickening of the pace towards social media platforms as routes to audiences, together with a surge in the use of mobile for news, a decline in the desktop internet and significant growth in video news consumption online. The Report combines key data points with a series of essays to add depth and context to the findings. In one of the essays, Alison Preston, Head of Digital Literacy at UK Regulator Ofcom, explores the generational divide in news consumption, along with the implication for industry and policy-makers.