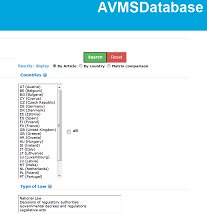 The European Audiovisual Observatory has just launched its AVMSDatabase and it is accessible free of charge here. This new tool shows exactly how each EU country has transposed the various rules contained within the AVMS Directive into national legislation. In particular, the AVMSDatabase makes it possible to research:

Maja Cappello, Head of the European Audiovisual Observatory’s Department for Legal Information, has presented the tool during the 42nd EPRA meeting held in Nuremberg on 28-30 October 2015. According to Ms. Cappello “it is vital to follow these developments in media legislation, not only because of the sometimes flagrant differences in transposition between certain countries, but also because of the current REFIT exercise of the AVMSD”.

This new database was developed thanks to a joint effort by the European Audiovisual Observatory and the Faculty of Law, Economics and Finance of the University of Luxembourg which provided the initial research subsequently transformed into a consultable database.