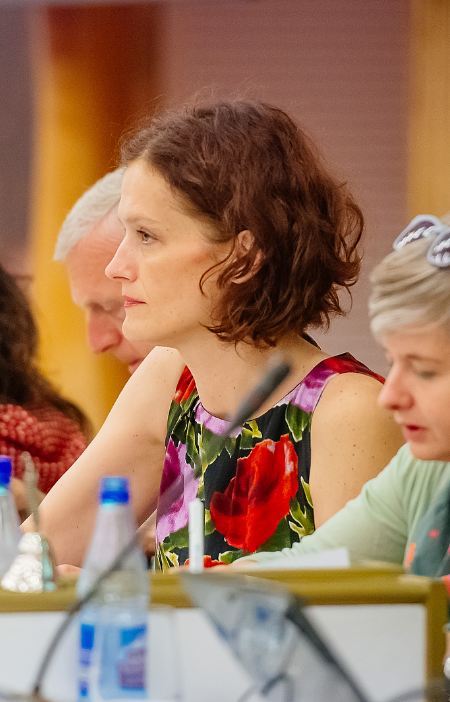 By-elections for the positions of EPRA Chairperson and two EPRA Vice-Chairpersons were held at the 39th EPRA meeting in Budva on 6 June 2014.

Further to the announcements made by EPRA Chairman Jean-François Furnémont and Senior Vice-Chairwoman Maja Cappello that they would resign from their positions owing to career changes, by-elections were held in order to find replacements for the interim period until the next full Board Elections scheduled for May 2015.

Helena Mandić, Director of Broadcasting at the Communications Regulatory Agency of Bosnia and Herzegovina, was elected Chairwoman for a period of one year. Ms. Mandić is no newcomer to the EPRA. Her authority joined the network in spring 2000, she has been attending EPRA meetings ever since, and she has been involved in the activities of the Board in her capacity of Vice-Chairwoman since May 2013.

©Picture courtesy of the Agency for Electronic Media of Montenegro


In carrying out her tasks, the new Chairwoman will be supported by the Strasbourg-based Secretariat and by four Vice-Chairpersons.

Pursuant to the EPRA Statutes, the Chairperson chairs the meetings and represents the EPRA in its external relations. The Chair is also responsible for the agenda and the Minutes of the meetings.

Celene Craig, Deputy Chief Executive at the Broadcasting Authority of Ireland and Juraj Polák from the Law and Licence Department at the Office of the Council for Broadcasting and Retransmission of the Slovak Republic joined the 5-person Executive Board for the first time.

Mònica Ariño, Director of International Affairs, Ofcom, United Kingdom and Damir Hajduk, Member of the Agency for Electronic Media of the Republic of Croatia, elected in May 2013 in Krakow remain Vice-Chairpersons.