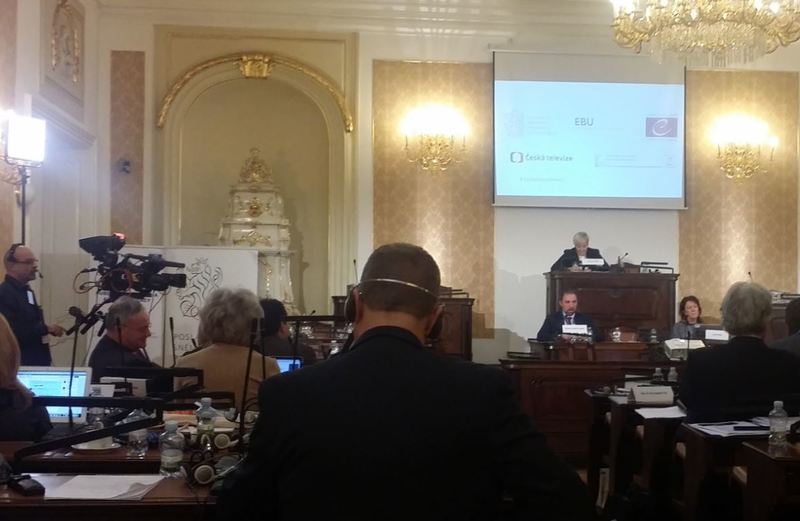 On 10 and 11 November 2016, the European Broadcasting Union (EBU), the Council of Europe and its Parliamentary Assembly (PACE), the Czech Parliament and Czech TV organised an international conference on Public Service Media (PSM) and Democracy.

Hosted by the Czech Parliament, the event brought together parliamentarians from Central and Eastern Europe, regulators and PSM managers from across the region. The European Parliament, the Office of the OSCE Representative on Freedom for the Media and the European Federation of Journalists were also supporting the event.

The conference discussed the role of parliaments in protecting the media; the impact of PSM on society; governance; how broadcasters deal with hate speech and the long term independence and sustainability of PSM in the region.

EPRA was represented at the meeting by Chairperson Celene Craig and Secretary Emmanuelle Machet. Celene Craig was one of the speakers in Panel 5 entitled "Sustainability of public service media - the way ahead" chaired by Ingrid Deltenre, Director general of EBU.

In her address, Ms. Craig emphasised the trend towards an increased role of regulatory authorities on issues of sustainability and funding of PSM. She highlighted the role that independent regulation can play as facilitator and buffer in times of crisis. In Ireland, the upcoming 5-year review of funding of public broadcasters RTÉ and TG4 will focus on sustainability and will aim to ensure that PSBs are well positioned to meet the challenges of the new media landscape - and thus help secure a strong overall audiovisual sector.

Her fellow panellist, Roberto Suarez Candel from the EBU-MIS, recalled that strong PSBs are important for the well-being of society and democracy as recently highlighted by the Report on Correlations. In his view, robust evidence and facts are needed to produce a narrative demonstrating that PSB is part of the solution to current problems of society.

Helena Mandić, Director of Broadcasting of the Communications Regulatory Agency (CRA) from Bosnia and Herzegovina - who is also EPRA Vice Chairperson - was speaking in Panel 3 on "Hate Speech: responsibilities of parliaments, regulators and public service media and the case law of the European Court of Human Rights". She retraced the activities of the CRA with regard to hate speech against a post-war backdrop. She also mentioned the recent cooperation between regulators in the Western Balkans supported by the Council of Europe and the European cooperation in the framework of EPRA.

Mirjana Rakić, Chairperson of the Agency of Electronic Media of the Republic of Croatia (AEM) reported on a recent decision with regard to the temporary suspension of the licence of a local broadcaster in a clear-cut case of incitement to hatred; the decision had triggered heated protest and demonstrations - supported by some politicians - against the regulator.