For the first time integrated in the programme of the EU Presidency, the European Platform of Regulatory Authorities (EPRA) met in the Lithuanian capital to discuss common challenges and exchange best practices on the occasion of its 38th meeting at the invitation of the Radio and Television Commission of Lithuania. For one and a half days, more than 150 representatives from 50 media regulatory authorities, observer organisations and guest speakers from industry and academia had stimulating exchanges on core regulatory issues. 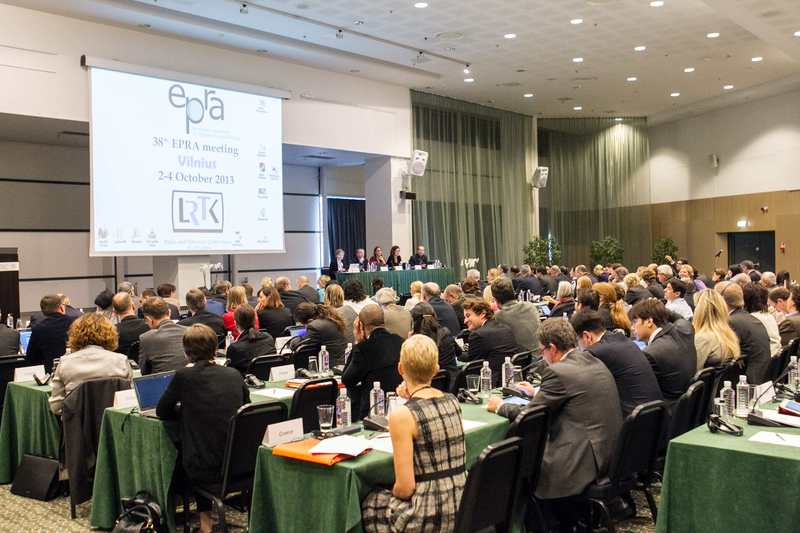 Picture courtesy of the Radio and Television Commission©


How to ensure a pluralistic media landscape, as an essential regulatory objective, was the overall theme of the meeting and encompassed several subtopics, such as:

The role of regulators in the new media landscape was once again at the centre of debates, with sessions taking stock of the methodology and best practices of monitoring on demand audiovisual media services (Plenary session 1) and exchanging on indicators and tools on how to assess media plurality in an online world (Plenary session 2).

Echoing questions raised by the recent Commission’s consultations on the Green Paper on Convergence and on the independence of NRAs, and on several participants and speakers advocated reinforced cooperation between audiovisual NRAs in Europe.

53 regulatory authorities are currently members of the platform. Further to recent regulatory reorganization, the Technical Surveillance Authority officially joined the EPRA in Vilnius and replaced the Public Broadcasting Council as the new Estonian member of the network.

Created in 1995, the European Platform of Regulatory Authorities is a forum for informal discussion and exchange of views between regulatory authorities in the broadcasting field in Europe. EPRA provides an open platform for discussions on a wide variety of relevant topics to regulators.

The next meeting of EPRA will take place in Budva, Montenegro, on 28-30 May 2014 at the invitation of the Agency for Electronic Media (AEM).