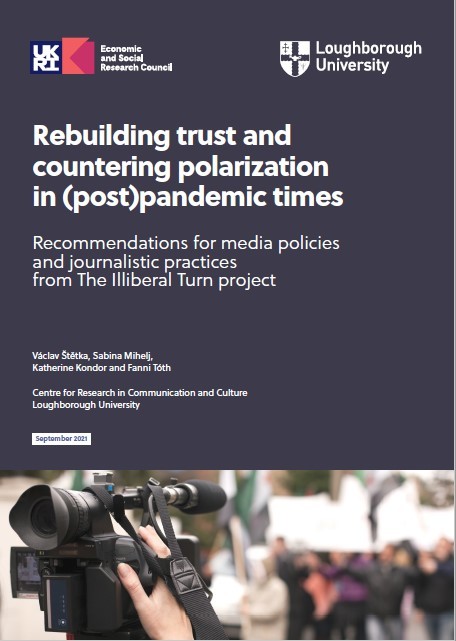 On 8 October, the Illiberal Turn project released its report titled "Rebuilding trust and countering polarization in (post)pandemic times". The Illiberal Turn is a Loughborough University research project investigating the relationship between consumption of certain kinds of media and political polarisation in four CEE countries.

The new report provides recommendations to policy makers and journalists aimed at informing the practices of different stakeholders' and helping understand the needs, experiences and opinions of the audience.

Based on population surveys, in-depths interviews and other data collection's methods, the results focus essentially on Czech Republic, Hungary, Poland and Serbia, while addressing common challenges in Europe such as populism, polarisation, pluralism and trust in media. As highlighted by the authors, the Covid-19 crisis has also amplified the deterioration of the economic situation of media and the governmental pressure and restrictions on journalists.

In response to these challenges, the Illiberal Turn, in this report, has developed policy recommendations:

The report also provides journalistic practices recommendations to encourage the values of impartiality, accuracy and fairness in reporting news, the development of internal guidance regarding polarisation, and the increase of high-quality investigative reporting.

The report also takes into account the lessons learnt from the pandemic crisis by suggesting the development of health crisis support and guidance by both regulatory authorities and media organisations to ensure the dissemination of accurate, clear and protective information.

The full report is available here.

To learn more about the Illiberal Turn, the second annual report on the activities of the Illiberal Turn was also published. It provides "a snapshot of some of the most interesting results stemming from both the quantitative and qualitative strands of the data analysis".

The Illiberal Turn is a Loughborough University research project investigating the relationship between consumption of certain kinds of media and political polarisation in four CEE countries. This project is based on a  comparative study of news consumption and political attitudes, using a novel multi-method analytical framework that combines survey data, digital tracking of media consumption, as well as media diaries and qualitative interviews with audiences.
EPRA is one of the supporting partners of the project. Concretely, this involves participation of the EPRA Board and/or Secretariat in the stakeholder meetings to discuss the project’s outcomes and provide comments and advice and help with the dissemination of the final outputs.
The report "Rebuilding trust and countering polarization in (post)pandemic times", was presented at the annual meeting of the European Federation of Journalists in Zagreb on 9 October 2021.