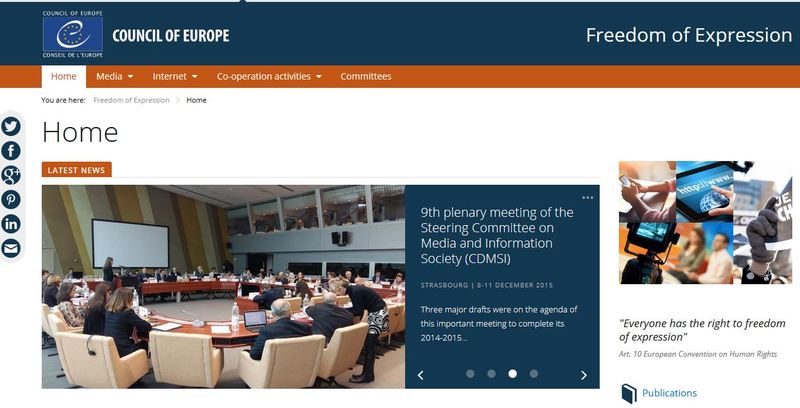 The Media and Internet governance Division of the Council of Europe has  launched its new Freedom of expression website on 23 February 2016. The new site brings together previously separated websites (Media, Internet governance and co-operation) and thus provides easy access to information on a wide range of activities and to documents.

The Media and Internet governance division of the Council of Europe acts as a reference point within the broad area of the work accomplished by different Council of Europe bodies on freedom of expression and media. The division also ensures the work of the Steering Committee on Media and Information Society (CDMSI) and of the recently launched Committee of experts on Media Pluralism and Transparency of Media Ownership (MSI-MED) and the Committee of experts on Internet Intermediaries (MSI-NET).

The Media and Internet governance division issues publications on relevant topics and organises conferences, seminars and other events to foster discussions on how to best preserve freedom of expression and information in Europe. It also ensures co-operation activities by offering expertise and assistance on Council of Europe standards to media and new media players, as well as guidance to governments and regulatory authorities in target countries. The aim is to foster an enabling environment for freedom of expression by taking into account the challenges of a changing media landscape. Current co-operation projects notably focus on Ukraine, Tunisia and Morocco.

With regard to topics covered, the media division works with various subjects under freedom of expression, such as safety of journalists, decriminalisation of defamation, gender equality in the media, countering hate speech.