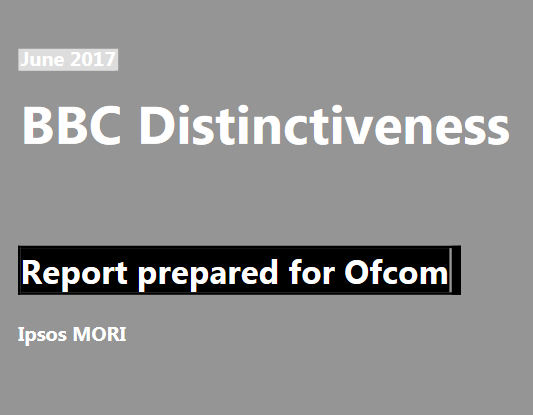 On April 3th 2017, Ofcom became the BBC's first external regulator. Ofcom has designed a framework to ensure that the BBC continues to deliver on the existing objectives re-affirmed by Parliament: accurate and impartial news and current affairs; education and learning; reflecting and representing the diverse people and nations of the UK. A new criterion was introduced:  delivering distinctiveness - that hard-to-define-and-measure special something that a national, licence fee-funded PSB must produce, and which it is now Ofcom's responsibility to define and measure.

Ipsos MORI conducted deliberative workshops across the UK to highlights how the BBC remains the foundation of public service broadcasting (PSB). Moreover the purpose of this report is to understand what the audiences’ expectations are in an ever-changing sector. It should be underlined that distinctiveness is essential to the BBC in justifying its public funding.

The research is comprised of large deliberative workshops, smaller workshops and in-depth interviews with a total of 131 participants. The research’s methodology is perfectly detailed in the report.