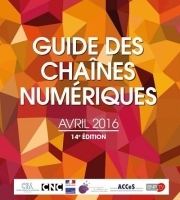 This guide, which aims to be a working tool for media professionals, provides an overview of digital channels which were licensed or registered on DTT (FTA and Pay), cable, ADSL or mobile networks.

The guide also provides key data from CSA and CNC on audiovisual and cinematographic production; revealing inter alia that investments of channels have increased of 8%. The document also looks at economic trends for digital channels and highlights an increase of the turnover of free-to-air channels (1%), whereas pay TV witnessed an increase of 2%. The article on the legal framework focuses on the Law of 14 October 2015 on the 2nd Digital Dividend and its impact on DTT. In the appendix, the guide presents this year two studies on audiovisual production: the first one authored by the CSA, "Le tissu économique de la production audiovisuelle" and the second by the CNC, "Les producteurs audiovisuels en 2014".