The 47th EPRA meeting took place on 23-25 May at the invitation of ALIA, the broadcasting regulatory authority  of Luxembourg. The event gathered 157 delegates representing 49 member authorities. 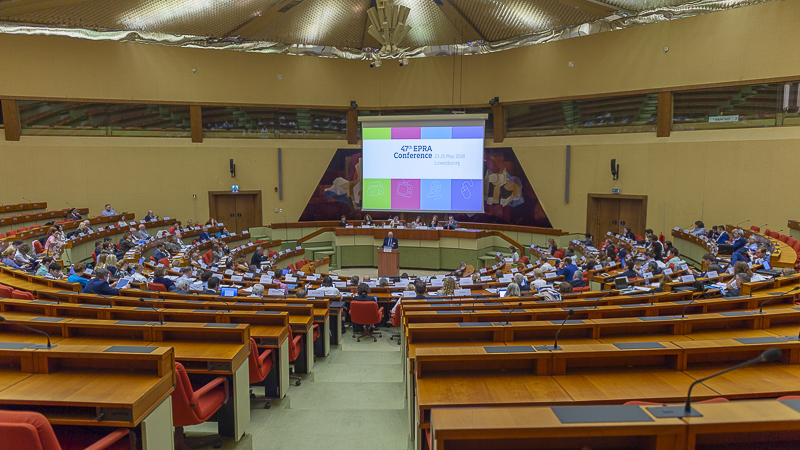 The plenary sessions focused on key challenges for democracy by addressing “The Future of Public Service & Public Interest Content in the Digital Age” (Plenary 1) and “The Regulation of Political Communication and the Challenges of Social Media” (Plenary 2).

Plenary Session 1, on 24 May, shed light on the acute challenges that stakeholders currently face in the distribution and delivery of public service and public interest content. The session addressed the "legitimacy crisis" of PSM epitomised by the recent Swiss vote on the "no-Billag initiative" and looked at the relationship between PSM and commercial media and questions of distinctiveness, the challenge of reaching an ever more fragmented audience in its entirety; and the question of securing a solid funding basis for PSM.

Plenary Session 2, on 25 May, opened with a keynote by Prof. Dr. Damian Tambini of the London School of Economics on social media power and election legitimacy. In his speech, he emphasised that the emergence of dis-information and mis-information generally undermines media systems that have been designed to support the search for truth - and thus indirectly affects broadcasting regulation. In such a context, broadcasting NRAs have a responsibility and should not hide behind a limited mandate. Using policy advisory functions, publishing research and commenting on public debates are examples of tools that regulators could make use of.

A new member has also joined the EPRA network: The Office for Communications of Liechtenstein has become the 53th authority to join the platform whose mission is to provide an independent and transparent forum for audiovisual regulators to share relevant information, best practice, experience and expertise.

EPRA was set up in 1995 in response to the need for increased co-operation between European audiovisual regulators. With more than 20 years of experience and a robust network of working-level contacts, EPRA is the oldest and largest network of broadcasting regulators and is an ideal setting for the exchange of information, cases and best practices between broadcasting regulators in Europe. It explores innovative means of regulating and analysing the audiovisual sector and sharing that with a wider audience of stakeholders.

The next EPRA meeting will take place in Bratislava, on 10-12 October 2018 at the invitation of the Council for Broadcasting and Retransmission in Slovakia.